We often get asked at Basset Hound World, do basset hounds get along with cats? As you can see from the picture above, they can end up being best friends. That’s our basset, Bronnie and our cat Lexi squeezing onto a tiny chair together. Maybe we got lucky, because they became best friends! However, there was an adjustment period for all parties involved. here’s our experience of a life of basset hounds and cats.

Basset hounds have a reputation as a highly docile and friendly breed. Basset hounds are generally known to be great with children and other pets. When introducing basset hounds and cats, there will inevitably be a time of adjustment for both animals. Give them their space as required and supervise when necessary and you should be well on your way to a harmonious household.

Do basset hounds get along with cats?

We got our cat Lexi back when she was a kitten long before we got our basset hound Bronnie. This meant that the house was already claimed by Lexi as her territory. She was quite happy ruling the roost and being the center of attention. When Bronnie the basset hound arrived on the scene, she was a tiny puppy, full of energy. She was small enough to hold in one arm and 90% of her body was ears. (We miss those days.)

Lexi cat was around three or four, so not quite a baby. The first few days involved keeping them separated. This allowed for Bronnie to adjust to her new environment. We allowed her to get used to her new home and take in her surroundings. This was our first experience of introducing a dog to a cat, so naturally we moved with caution.

After a while, we were able to introduce the pair under close watch and see what happened. Would they be friends or would they take an immediate disliking to one another? We were fortunate enough to have it work out okay from the get-go.

Lexi is quite a chilled out, relaxed cat, although she can be quite jumpy and afraid of sudden movements. She never once showed aggression towards Bronnie and the same was reflected back. Bronnie was a basset hound that just wanted to play all of the time, so she always greeted the cat with enthusiasm and a friendly disposition.

It was clear sometimes that Lexi needed her space and didn’t want a basset up in her face, so there were times where we had to intervene. As the weeks went on, a lot more trust was built up between the pair and we felt more comfortable letting them do their thing under less supervision.

As Bronnie grew bigger and bigger at a staggering rate, there were moments where she didn’t realize her own size and strength. There were admittedly a few moments where Bronnie basset got a warning hiss or paw when she was taking things too far, but nothing escalated beyond that. Our basset learned her boundaries and these experiences served to increase their mutual respect in the long term.

Fast forward a few years and they know and respect each other’s expectations for privacy and know when to keep a safe distance. We have cat and dog beds for each of them, but they often decide to cram into the same one! Our experience of introducing a new basset hound to our cat was quite a smooth and organic one, but we appreciate it can sometimes not be so smooth.

Basset hounds are generally very friendly naturally, so when introducing a basset to a cat, you can mostly expect that it’ll run smooth. If you can allow time for the new pet to get adjusted to their environment, it’ll help put them in a good mindset to make the transition that much smoother.

In general, we find that our basset gets along absolutely fine with our cat. However, she is naturally quite tame and laid back in personality. There were moments where her patience was tested, but they generally live a harmonious life with one another.

It’s mostly easier to introduce younger animals, but if you’re introducing a basset pup to an older cat, be wary of how your cat reacts to new arrivals in the house. Some cats can get rather territorial, so drawing on past experience can help figure out how it’s going to unfold.

There are a lot of variables at play, including your basset’s personality and your cat’s too. Here’s a few words of advice on how to make the introduction between basset hounds and cats.

How to introduce basset hounds and cats

Create a suitable environment to aid the introduction if possible. Separate the basset and the cat into two rooms initially. This allows both animals to start getting a scent of each other. After a few days, swap the rooms over so they both get a chance to sniff each other out.

A slow introductory period can be advised, just to see how the initial reactions are. We found this didn’t take too long and we slowly increased this to letting our basset and cat get closer to one another and get get a feel for how they’d get on. Keep an eye out during this early stage, just to make sure that they aren’t going to get off on the wrong foot (or paw).

Remember to reinforce good behavior in both animals and pay them both equal amounts of attention. They both need to feel comfortable with the new setup and feel included.

Once you’ve allowed a natural amount of time and you feel that they’re getting more used to their new home, you can probably safely let them roam free around each other. Make sure that each has their own space to hide away when needed. This is needed more for cats. A high, out of basset eye level cat perch can be perfect for achieving this.

The basset hound is inherently a pack animal, so they are well suited to have companions within the household. The basset hound disposition will entail them to stick together and form alliances with any pets they share a house with.

This is why bassets are generally known to be very good with children and other pets. They’re bred to travel in groups and in fact, can often be distressed when left alone. In most cases, they will be more inclined to make friends straight away. This can include enthusiastic behavior and

Cats, on the other hand tend to be naturally more solitary and territorial. They can take a little bit longer in some cases to get used to their new hyperactive furry friend. It’s probably a lot easier to introduce younger cats to bassets than older. Ours wasn’t that young but still

When first making the introduction, allow each pet their own room preferably separated by a door. This gives them a chance to pick up on each other’s scent. Swap them out after a while and they’ll be more ready for a smooth intro when the time is right.

Bassets, especially basset hound puppies will be inclined to jump all over the place and all over any potential new friends. Reinforce good habits by rewarding calm and appropriate behavior around the cat. Negative behavior will naturally sometimes occur, but it’s best to not punish if it’s only very occasional.

Try not to rush things when making the introduction and advancing through the stages of getting your basset and cat acquainted. If you feel that either party is not quite ready, don’t rush things. It’ll all fall into place after they’ve both had as much time as they need.

Consider your cat’s space when bringing a new animal into the house. The basset pup is naturally highly playful and hyperactive and getting used to a whole new world of interesting smells. Ensure your cat has some space, maybe a cat perch out of reach of the pup, for when they need it. 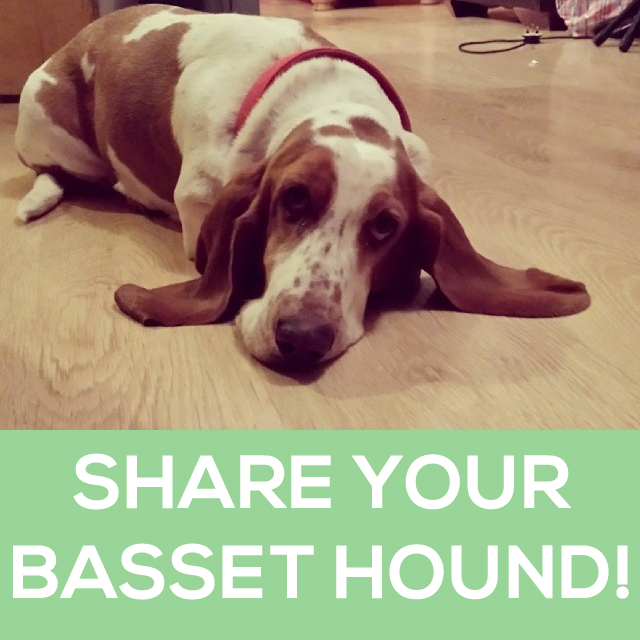